Ash and Jared and Ash's mother are the only ones who will protect the town from evil. However, the Lynburn family is in shambles. Jared and Kami are not having the best friendship, and Rob is getting more and more powerful. With Jared no longer being powered by Kami, everything seems to be bad for everyone except for Rob and his rather power-hungry followers.

The entire town of Sorry-in-the-Vale is pretending that everything is perfectly fine. First of all, I have to mention Sarah Rees Brennan's slaying. She subverts a few particular topics, and I have a feeling Brennan enjoys deconstructing a small but important thing. That piece of dialogue, which mentions Holly and Angela, is pure gold. Ash, Jared, and Kami have their own parts in that section.

Second of all, the storyline is wonderful.

Never for a moment does the plot stall or get boring. It is so exciting to see Kami slowly trying to fight Rob's sorcerers even though she is completely powerless in magic. But she isn't powerless. She has her brains, and she has her wits. She has her memory, and I'm amazed by how Sarah Rees Brennan is capable of making a seemingly normal and quirky girl into a brilliant hero.


As I said before, Kami is a strong character. Though she does have moments of weaknesses, she doesn't give up.

She is unique, and her personality is wonderful. I can easily imagine this Asian girl right next to me, because she is so well-described. She stands out so much. Between Jared and her and any other characters , Kami is the best. Jared is still the bad boy with snarky words, but I love him anyway though I love Kami even more. He has his problems and issues, but they make him seem even more real. 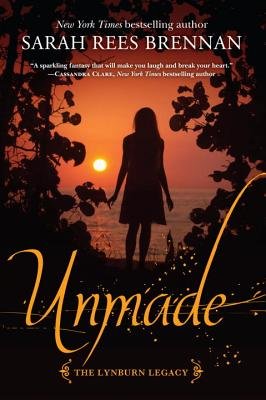 He has a good heart but also a terrible past. Brennan does a brilliant job of recapping by using Kami's skills in journalism. Readers would probably love to visit Sorry-in-the-Vale, but it doesn't seem to be muggle-friendly. The ending is one of the most shattering and excellent parts of the book.

It has a strong heroine and an amazing conflict against a creepy, cunning sorcerer. Most or even all of the dialogue is pure gold, and readers will treasure every snarky word. I recommend this to those who love magic and deadly but also adorable heroines. Rating: Four out of Five Source: Library.

After reading the first book in the Lynburn Legacy series, I was completely enamored with the characters and the world. I was so eager to jump back into the mysteries surrounding the Lynburn family, and Untold does not disappoint as a follow-up to the first book. The characters are the strongest aspect of this series for me, and what I love about Untold is that the narrative points-of-view expand to include Ash and Holly as well as Kami and Jared.

Bringing to light Ash's thoughts and feelings about his family adds another layer to his character. His and Jared's relationship really grows in this novel and it's so enjoyable to watch them fight but also learn to understand each other a little better. Holly's narrative is the most emotional arc of the story as she struggles with her feelings towards Angela. Brennan has one of the most humorous writing styles I've read and I definitely found myself laughing out loud at some parts.

The characters sass each other throughout the entire novel and the sarcasm flows freely. There are still plenty of dark moments with all of the complicated relationships and terrifying violence. Brennan achieves a great balance in this novel. The light and dark work together perfectly. The characters face a pretty hopeless situation against Rob Lynburn and his sorcerer followers.

There isn't much hope that Kami and her friends can succeed, which keeps the tension high. I just had to keep turning the pages to find out if they would all make it out of this fight alive. Untold packs an emotional punch with its diverse set of characters, engrossing action, and danger at every turn.

The sequel to Unspoken finds Kami and her friends in a fight against Rob Lynburn and his sorcerers. Rob wants power and he wants the town. He wants a blood sacrifice. This book, like the first, was so much fun to read. The humour that I loved in Unspoken was still present and Untold went deeper into some of the characters that had less focus in the first book. There was also more about the myth of the whole Lynburn family and more about the magical world that was really interesting.

This book never felt like a middle book of a series, which was great. Kami was still the character I loved from the first book. Her voice still reminded me a bit of Veronica Mars, all sarcasm and great one-liners that had me laughing. Her determination to fight Rob and keep all her friends and family safe was great.

I liked seeing her bonding more with the new characters to her group, Ash and Holly especially. And Rusty. Rusty was awesome and hilarious. I really liked seeing more of the family aspect in this book. I loved her relationship with her father and her little brothers.

Her relationship with her mother was more complicated due to different views but it was still interesting. The Lynburn family was also very interesting. They were definitely not an overly affectionate family, unlike the Glasses, but there were some really nice bonding moments that gave me hope that it could lead to more.

The first book was all about the mystery of the Lynburns and the murders in the forest. This one was more of a chess game, each side making a move and waiting for the reaction. It was a lot of setting up for a third book checkmate and it was very tense. There was a lot of humourous dialogue or observations, mostly from Kami, that would offset the darker part of the book and it created a nice balance. Star ratings in yellow are from our Staff Reviewers.

Star ratings in green are reader reviews. Anyone can post a reader review, so post yours today! We have all sorts of YABC buttons for your website. Grab one here and link to YABC! FAQs Advertise Become a member. Create an account. How to resolve AdBlock issue? Write Review. Author s. Sarah Rees Brennan. Random House Books for Young Readers. Paranormal Romance Gothic Mystery. But Kami Glass knows the truth. Sorry-in-the-Vale is full of magic.

In the old days, the Lynburn family ruled with fear, terrifying the people into submission in order to kill for blood and power. Now the Lynburns are back, and Rob Lynburn is gathering sorcerers so that the town can return to the old ways. The town must make a decision: pay the blood sacrifice, or fight. For Kami, this means more than just choosing between good and evil. But who should that be? After college she lived briefly in New York and somehow survived in spite of her habit of hitching lifts in fire engines. Since then she has returned to Ireland to write and use as a home base for future adventures.

Her other titles include the Demon's Lexicon Trilogy. Fans of romantic fantasy will devour it. Buy at Local Store.